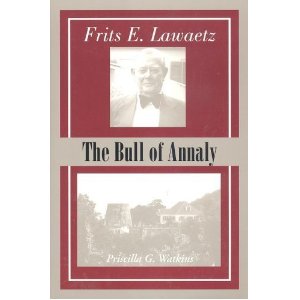 “The Bull of Annaly” by Priscilla Watkins
Publication Date: 2000

One of St. Croix’s most colorful figures, Frits Lawaetz was born in 1907 at Little La Grange in Dutch West Indies ten years before the United States purchased the islands. After apprenticeship in Denmark and work in Puerto Rico, he came home to St. Croix to marry his childhood sweetheart. Frits was already acclaimed as a successful, respected cattleman who played a major part in developing the Senepol breed, when, at the age of forty-seven, he ran for the Legislature of the Virgin Islands. In spite of the loss of a leg a few years later, he served over the next twenty-four turbulent years, as the islands turned from agriculture to tourism. An elder statesman now, Frits remains convinced that it is each man’s duty to serve his country and, by hard work, to make it a little better than it was before he tried.  Frits spent much of his adult life living at Estate Annaly while working for Ward Canaday and then later after the Lawaetzs purchased the property from the Canadays.

“Another well done project. Captures the history of a very important islander… and events that shaped the island’s growth. I was raised in St Croix and new Fritz Lawaetz was important, but not how significantly until I read this book – wow, it’s amazing… and I knew him.” – Evan Watkins

Email annalymill@gmail.com to order. Or order at Amazon.com

Airing on March 29th... Annaly Mill featured on the HGTV show "You Live In What?"

Annaly Mill was “home base” for Jon and Gina Brunson of Addicted to the Outdoors TV Show recently filmed on St. Croix and aired on the Outdoor Channel in December 2011 and January 2012.

Annaly Mill has been visited by President Harry S. Truman and Queen Margrethe II of Denmark.